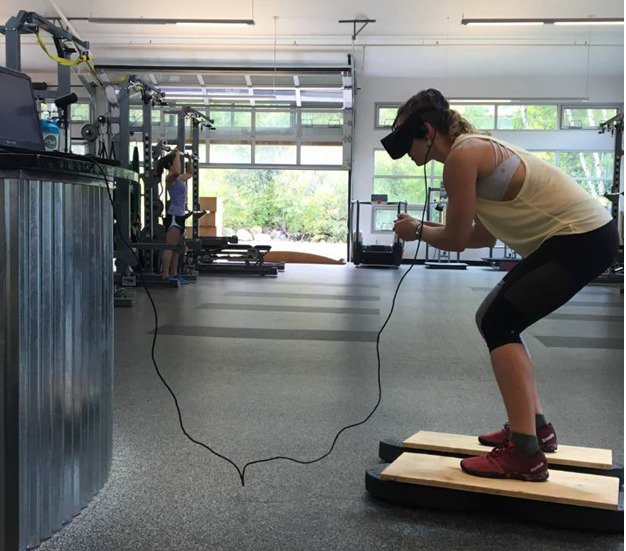 A quarterback is turning his head seeking for gaps between defenders. Baseball player swings the bat, hitting the ball thrown by the pitcher. A skier is scanning and memorising the features of the ski track.
But they all do this at home, without coaches, sports fields, and equipment. In this article we will tell you, how VR trainings have opened new opportunities for sports people and organisations.

In recent years, VR has become a popular tool among various sports organisations for training their athletes. The benefits that VR provides, include reduction of injuries due too shortened time spent in practice and a safer environment, improvement in motor control, and building the confidence and decision making.

A study by CNBC reflects that by giving quarterbacks an immersive experience, their decision-making is being improved at average by 30%.

The technology has also proved to be engaging, and no resistance from athletes to this kind of training has been recorded. VR enables sports people to polish their movements with an element of entertainment, which explains its high efficiency.

In 2015, Real Madrid was the first sports team to use 360-degree filming for their SMM campaign in Facebook. In several months, a number of other clubs have adopted this technology. Paris Saint Germain has launched a series of “behind the scenes” VR videos on YouTube, and FC Barcelona has given real-time tribute Johan Cruyff at the last El Clasico using 360-degree filming.

Nevertheless, clubs are not the only organisations in the field of sports that take advantage of VR technology. Reebok, for instance, published 360-degree videos about its brand ambassadors’ trainings, and Nike Football used this feature to take fans to the dressing room of the Turkish national team.

In the end, what does this article tell us about? Of course, it’s you to decide, but the explosion of VR popularity in all industries is undeniable. 360-degree filming that several years ago was an innovation is sports, is now a marketing tool effectively used by many brands. At Warp VR we help brands to implement their ideas in this industry by filming 360-degree videos and designing VR scenarios based on them. And though at the moment we do not work with professional athletes directly, we are constantly developing our product mix. If you would like to learn more about our offers, please contact us.

No stories are found.

Trusted by the world’s best employers

Join a growing list of companies who use Warp Studio to easily train employees with the power of Virtual Reality.